Hiroshige at the Ashmolean

The Ashmolean Museum, in Oxford, has a small part of its Hiroshige collection on display at the moment (closes 15th February 2015):

The woodblock prints in the exhibition are part of his ‘Fifty-three Stations of the Tōkaidō Road’ series, first published in 1833. It was a treat to see these rarely exhibited miniature masterpieces, and you can spend ages looking at the details of each one which give a fascinating insight into life in this period when Japan was closed to the outside world. Unfortunately the exhibition didn’t have a map of the Tōkaidō Road, and did not mention the huge influence Hiroshige had on 19th Century Western art. This post will fill the gap! 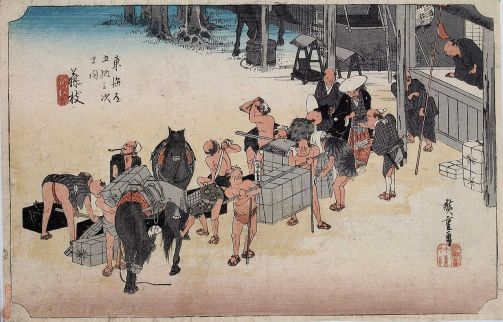 Utagawa Hiroshige (1797-1858) was one of the two greatest late masters of the Japanese woodblock print, or ukiyo-e, the other being Katsushika Hokusai. He showed talent at an early age and started his career producing prints of beautiful women, Kabuki actors, and famous warriors which were then the usual fare of ukiyo-e artists. His great breakthrough came with this series of illustrations of the post-stations on the Tōkaidō road between the Shogun capital Edo (now Tokyo) and the Imperial capital Kyoto. A journey of over five hundred kilometres, this was the coastal route more or less followed today by the Tōkaidō Shinkansen bullet train. The first map shows the Five Highways of the Edo period, the Tōkaidō being the most important and well-used. Travel, particularly along the Tōkaidō, was a very popular topic in art and literature at the time and the publisher of Hiroshige’s series was undoubtedly cashing in on this with high class souvenir prints of the journey.

These government controlled stations, or rest places, contained inns, stables, porters, and other facilities for weary travellers, most of whom did the journey on foot. Definitely not walking but carried in palanquins, or norimono, were the daimyo, the feudal nobility, with retinues of 3000 or more who regularly travelled along this route between the two capitals.

This image is of a daimyo procession starting its long journey at the Nihonbashi bridge in Edo (modern Tokyo). 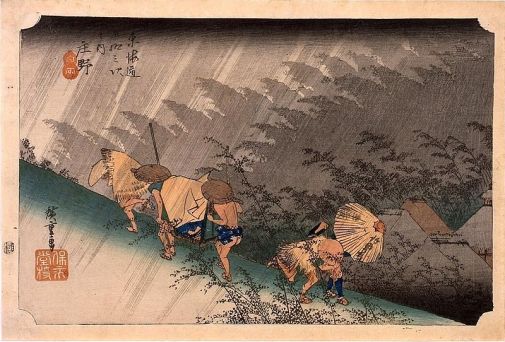 Hiroshige’s images masterfully capture the atmosphere of this journey, in all kinds of weather and during all the seasons. He was superb at creating the effects of rain, snow and wind, in what is a very difficult medium, the carved wooden block. The details in these images are extraordinary with tiny figures in vast landscapes, or every detail in a group of travellers arriving at an inn. There is humour too, with straw hats being blown off in gale force winds, or drunks being ejected from taverns. 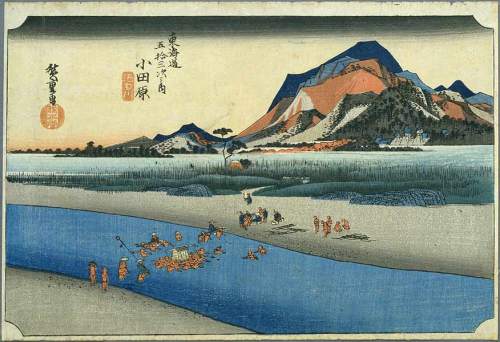 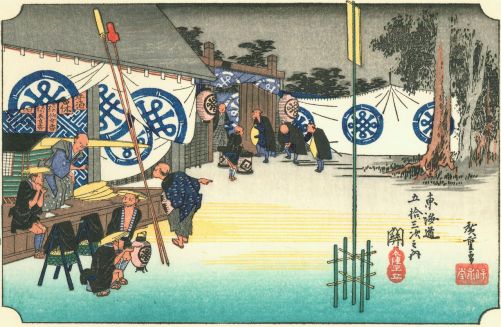 The woodblock print was a collaborative effort between the artist, wood carver, and printer, usually commissioned by a publisher for a particular series of prints. The images were hand printed on to hand-made washi paper which enabled the printer to achieve the beautifully subtle shading on Hiroshige’s prints, some of which look like paintings. Each colour was printed by a different block so the registration of each image had to be perfect, an astonishing achievement bearing in mind thousands of these prints were issued. 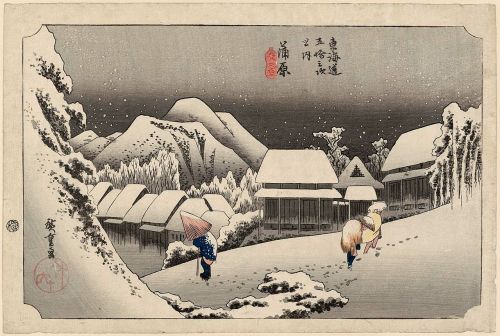 Hiroshige and Hokusai had a profound effect on Western art towards the end of the 19th Century, particularly in France. Van Gogh, Manet, Monet and other Impressionists had large collections of Japanese prints, and their work shows both the direct influence of ‘Japonisme’ by incorporating Japanese themes, and indirectly with the techniques of flattened perspective, lighting and atmosphere copied from these prints. This is Van Gogh’s ‘Bridge in the rain (after Hiroshige)’ 1887 (Van Gogh Museum), his interpretation of Hiroshige’s 1857 print ‘Sudden Shower Over Shin-Ohashi Bridge and Atake’. The Japanese pictograms are meaningless but are meant to add to the oriental flavour of the work! 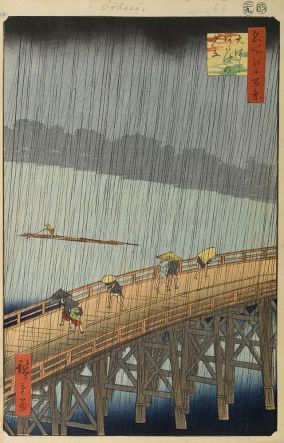 Whistler, of course, was highly influenced by Hiroshige, with Japanese styled paintings such as ‘Caprice in Purple and Gold No. 2: The Golden Screen’ 1864 (Freer Collection), which shows his mistress Jo Hiffernan in a kimono looking at Hiroshige prints. His series of Nocturnes in the 1870’s showing nocturnal views of the Thames was also inspired by Hiroshige, including the notorious masterpiece ‘Nocturne in Black and Gold: The Falling Rocket’ 1875 (Detroit Institute of Arts), the subject of John Ruskin’s criticism and the subsequent libel case that bankrupted Whistler. This was clearly influenced by one of Hiroshige’s last prints, ‘Fireworks at Ryogoku’ 1858. 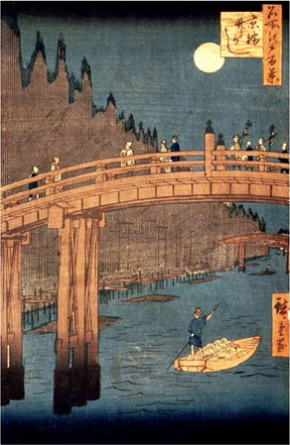 The architect Frank Lloyd Wright was also a great collector of Hiroshige prints, including the Fifty-three Stations of the Tōkaidō Road, describing the artist’s work as “Some of the most valuable contributions ever made to the art of the world”. In 1906 he organised the first Hiroshige exhibition in the West at the Art Institute of Chicago.

Hiroshige 53 Stations prints from top (not all in Ashmolean exhibition):

Links to images of all of the 53 Stations of the Tōkaidō Road:

For the history and technique of ukiyo-e woodblock prints:

All images via Wikimedia Commons