A series of posts celebrating the early Leica camera accessory, ingenious and often beautiful small masterpieces of functional design. Ernst Leitz produced the first ‘system’ camera in 1930 (the Leica 1 Model C), and by 1933 the accessory catalogue ran to over 100 pages. These were so well designed that many were still in production over 20 years later. See the first post for the Leica story.

Until the late ’30s the only way to take a ‘selfie’ with your Leica was to use a crude non-Leitz device such as this early 30s ‘pneumatic’ timer made by Direkt.

Leitz introduced their delightfully simple timer in 1938. Just less than 50mm long, in Leitz telegraphic/catalogue code APDOO*, the device screws on to the release button of the camera. You turn the disc to set the clockwork timer (around 10 seconds) and pull the top knob (precisely as instructed on the barrel!). When the timer stops a plunger presses the shutter release button below. The large spot on the disc lets you know when time’s up. This is a rare early nickel and black version as most were in chrome and black. 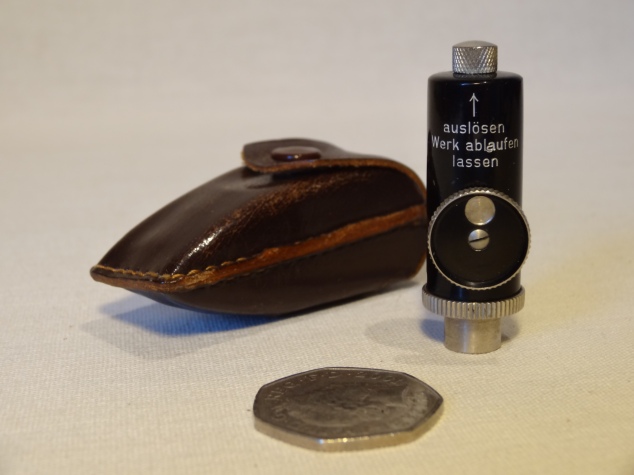 As it is such a good example, a word about the unique engraving process on early black enamelled Leica cameras and accessories. At first sight you might think it was the conventional white paint engraved lettering on the black finish like every other camera. However, as this is Leica,  filling the engraving is done by an expensive, time consuming, and ancient process they called ‘Wismut’. Wismut (the German for Bismuth) is a brittle silvery coloured metal with a very low melting point which was applied into the engraving after the black enamel had been painted on. Heated slightly (not enough to damage the enamel) it bonded to the bare metal left by the engraved line and the excess was wiped away to leave the neat silvered engraving. Difficult to see from photographs it does have a unique appearance unlike conventional white line engraving. Even though thousands of cameras and accessories were being made every year by Leitz the Wismut process was apparently done by only a few specialist workers. The hand engraved lettering on the APDOO is only around 1.5mm high and is very precise (apart from a badly engraved 2nd ‘a’ in ‘ablaufen’ which shows that even these geniuses made mistakes sometimes!).

This is a 1952 1f with the later chrome APDOO which has a different knob and dial.

A brilliant little gadget for looking around corners or street photography. You aim the camera at your subjects but you are looking at right angles to the lens not giving any clue that you are taking their photo. It just has a simple prism inside the barrel.

The WINKO was designed for the Model 1A and 1C, and later non-rangefinder models. This is the earliest version with a large bakelite eyecup. 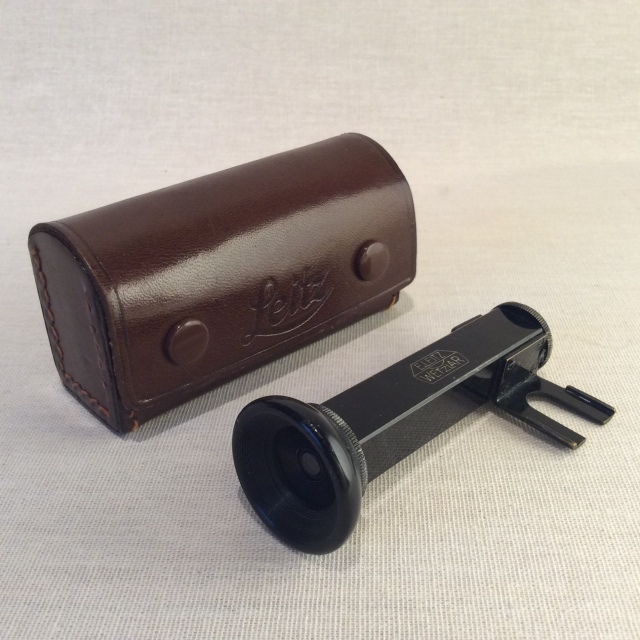 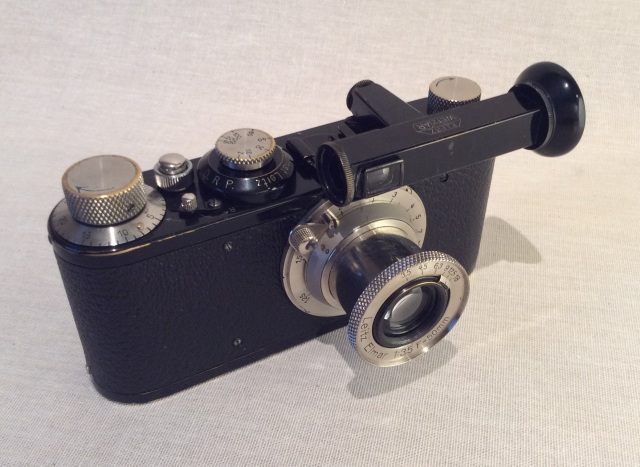 When the Model D rangefinder camera was introduced in 1932, the viewer was fitted with a drop down prism for looking through the rangefinder, and for obvious reasons it now fits to the back of the camera’s accessory shoe. The earliest ones have the WINKO’s large bakelite eyecup. 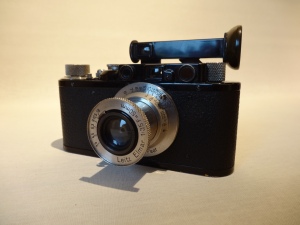 Another ingenious and useful viewfinder shown on these pages of the 1933 catalogue. More functional looking than beautiful, it has a simple right angle prism like the WINTU but this time for looking down at the top of the camera for low level shots. Only meant for the standard 5cm lens, the front looks rather like a miniature 1950s television set!

Other Opinionated Designer posts on Leica: